Many Canadians experience difficulty having a good night’s sleep, either occasionally or chronically. Much of this is due to stress and the modern environment, including artificial light and electromagnetic pollution. Electro-magnetic fields, such as those from cell-phone towers, smart-meters, and wire-less signals, have been shown to cause a lowering of serotonin levels in the body. Serotonin is a calming neurotransmitter that shuts down an overactive brain in order to prepare us for sleep. Serotonin is also responsible for helping the body to produce melatonin, the hormone that runs our sleep cycles.

Living outside of the cycles of natural light causes our melatonin levels to become disrupted. If we were to go to bed when the sun went down and rise with the sun, as our ancestors did, most of us would not have sleeping problems. In fact it is still important to try and get at least one hour of natural daylight, outside, in order to maintain any sort of natural melatonin production. Because we often stay up way past sunset, using artificial light, and do not always rise with the sun, our melatonin cycles become disrupted. Melatonin serves other important functions in the body as well as regulating sleep, including maintaining fertility, and serving as an antioxidant. One study even linked artificial light, for those working night shifts, to an increase in breast cancer, due to disruption of melatonin levels.

Lying in bed unable to fall asleep, due to constant thoughts or worries, is a common problem, and is linked to a deficiency in serotonin. When our serotonin levels are too low, we are both anxious in the daytime and unable to relax at night.

HOW DOES SLEEP TIGHT™ WORK?

SLEEP TIGHT™ contains natural, non-habit forming, substances that will effectively raise serotonin levels. These include 5HTP and L-Theanine, as well as a number of herbs that facilitate serotonin production. The herbs included in SLEEP TIGHT™ have a long track record of being used in herbal medicine as sedatives and sleep agents. Recently science has confirmed the validity of this traditional approach.

In another study, the results showed that the 600 mg dose of the combination of Valerian and Lemon Balm, ameliorated the negative effects of laboratory induced stress, effectively reducing levels of anxiety.

WHAT INGREDIENTS ARE IN SLEEP TIGHT™?

5-Hydroxytryptophan is an amino acid that the body uses to make the calming neurotransmitter serotonin. It is naturally derived from the seed of Griffonia Simplicifolia, an African plant. Used as a daytime anti-anxiety agent, 5-HTP has also been shown to be effective in the treatment of insomnia. It can decrease the amount of time it takes to fall asleep and reduce incidences of waking during the night.

Gaba-aminobutyric acid is the other neurotransmitter, besides serotonin, that the body uses to keep the brain calm. Anti-anxiety drugs like Valium work by increasing the effects of GABA in the brain, but unlike such drugs GABA is safe, non-addictive and has no side effects. While commonly used to reduce severe stress-related tension and anxiety, GABA has also been shown to help the body get to the deep levels of sleep, and to stay in deep sleep for the needed amount of time.

L-Theanine is an amino acid derived from green tea that is a precursor to serotonin. It is used as a day time anti-anxiety agent, and often also used to treat ADHD, as a safe alternative to drugs. Clinical studies on L-Theanine have proven it to “improve both the quality of sleep and the mental state of being refreshed upon awakening.” A decreased occurrence of nightmares was also observed.

The herb Valerian has been traditionally used as a sleeping aid for centuries, and to this day it is a common ingredient in over-the-counter sleep medications, in Europe. Studies have confirmed that those taking Valerian fell asleep faster, slept more deeply and awoke less groggy than those on the placebo.

A member of the mint family, Lemon Balm has been used since the Middle Ages to treat anxiety, stress and sleep disorders. In modern times, studies have shown it to be particularly effective in reducing severe anxiety and promoting healthful sleep, when used in combination with other calming herbs. In one study, combining Lemon Balm with Valerian, 81 percent of users reported sleeping much better than those who took the placebo.

This herb has also been traditionally used for hundreds of years, mostly to treat anxiety, convulsions, heart palpitations and nervous disorders. Passion flower is often used to calm hyperactive people, which supports its value in treating insomnia induced by mental stress. It is also often used to help people wean themselves off of pharmaceutical sleeping pills and tranquilizers.

Considered by herbalists to be a “nervine”, Scullcap has the ability to restore and rebuild the central nervous system. It is used to treat conditions of depression, drug withdrawal, mental exhaustion, as well as PMS. Known to calm an over-active mind, the sedative effects of Scullcap makes it a perfect addition to natural sleeping formulas, and it is commonly used this way in European countries.

Melatonin is a hormone secreted by the pineal gland and is responsible for controlling our sleep/wake cycles. Darkness causes the pineal gland to release melatonin, telling us it is time to sleep, and light suppresses melatonin, letting us know it is time to wake. In the modern world, with artificial light, and electro-magnetic pollution, our melatonin cycles are often thrown into an unbalance state. Low levels of melatonin are linked to sleep problems, though more commonly in the elderly, rather than in younger people. Melatonin has proven itself to be an effective sleep aid for most people, and is also effective in the treatment of jet lag.

HOW DO I USE SLEEP TIGHT™?

SLEEPTIGHT is taken 20 to 30 minutes before bed, ideally on an empty stomach, though it can be taken with carbohydrates (which also help to produce calming serotonin). Start with one or two pills the first time, so that you may take a third pill if you wake in the middle of the night.

Those of a low body weight and/or only slight sleeping difficulty, will probably only require one SLEEP TIGHT™ pill, while those who have a large body mass and/or serious sleeping problems may need all three pills at once. The only side effect of too much SLEEP TIGHT™ can be waking up a bit groggy, so it is best to find your ideal dosage. Skipping a couple of days a week will also prevent the body from becoming habituated to the product, reducing its effectiveness.

Consult with a health professional before using SLEEP  TIGHT™ if you are on any medications for anxiety or depression, and if you are pregnant or nursing. SLEEP TIGHT™ should not be given to children or adolescents (melatonin is especially unsafe for those going through adolescence, as the body withhold melatonin to further the development of the sex organs) 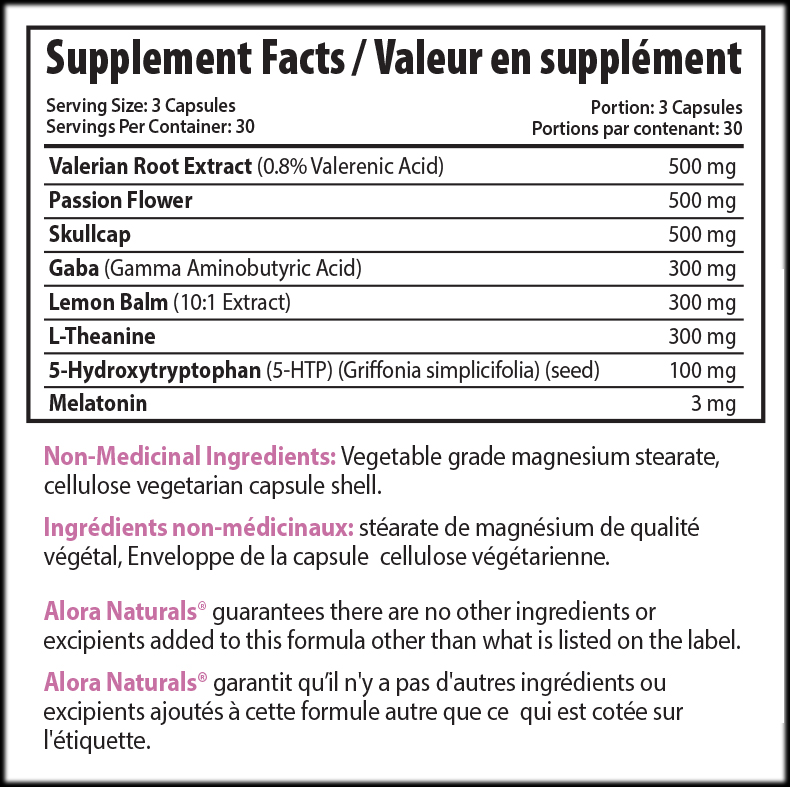 Note: Ingredients and values may be slightly different depending on flavour and container size.